In a Japanese state of mind

My next really big costume is going to be a geisha hikizuri kimono for the 2019 Costume Con in Boston. I don't normally go to conventions outside of the midwest, but I won a free membership to it with my Cinderella costume at WorldCon. (Yay!)

I normally win workmanship awards but not performance awards, so the last time that I competed at Costume Con I focused on my performance and didn't worry about workmanship. (My Edwardian quick-change) This time, I am determined to win awards for both!!!

So I'll be (hopefully) blowing the workmanship judges away by teaching myself the traditional technique of hand-dyeing and painting kimono called yuzen-zome. And I'll be recreating a real geisha performance from a YouTube video.

I've never actually made a kimono before.

So I've been immersing myself in research on kimono making and traditions. My first attempt is a summer cotton kimono called a yukata. It's super casual and worn to summer festivals the same way that we would wear shorts, a tank top and flip-flops. It's also a little easier to sew than a regular kimono because it's cotton, not lined, doesn't have as much structure and is frequently machine sewn. (High end silk kimono like those worn by geisha are always hand sewn.)

Traditionally, yukata are white and blue/indigo. Modern yukata are all sorts of colors and patterns. So here is a cotton fabric that I picked out for mine. It's colorful, but the colors are softer. I don't think you can tell from the pics, but there are subtle gold outlines around the shapes. To help you visualize it, each motif is about 1.5" (about 4cm) tall.

Update: Here's a pic taken of me wearing the final yukata at my costume guild's MakerFaire booth. Please forgive my lousy kitsuke! 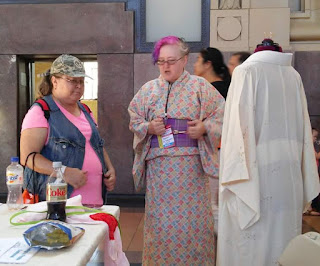