Actually, it just recently struck me that I probably shouldn’t be posting tons of pics and info about my dress if I’m going to be competing in it.

So I won’t be talking about my française just yet. I’ll keep writing entries, I just won’t post any of them until after the competition in May. (sad sigh)

Until then, I’ll be sharing other costumes (completed and in-progress) to fill the gap.

So let me tell you about the Curtain Along! 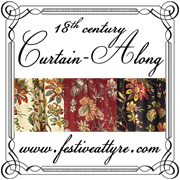 Jen over at Festive Attyre found a perfect 18th century print on some curtains at Lowe's in 3 different colors. (You can see them on the nifty little badge graphic she created above.) You can also buy the fabric itself at  Joann's craft store, but the curtains are MUCH cheaper for the same material. So she asked if anyone wanted to sew stuff along with her out of the curtains.

I ran out & bought 3 of the cream background & 1 with the red.
I think I'm going to make a late-period polonaise. The red one is going to be used for an alternate petticoat so that I can switch out the look. Of course, I have no idea if a different patterned petticoat is period. (Say that 3 times fast!) I've seen them with contrasting *solid color* petticoats, but not with a contrasting print. Oh well....
This one is just for me, anyway. :)

I'm thinking something like this example from the MET: 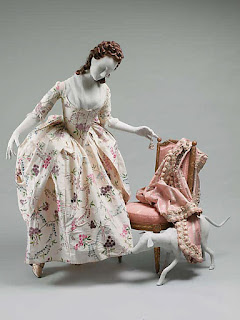 Wouldn't this look adorable in the cream with the red petticoat?

Plus it will give me the excuse to play around with a hedgehog style hair-do. I know the pic doesn't have one, but the MET says the dress is from 1780 which would totally allow me to rock a hedgehog!