The Titanic Outfit....Big Hats are the Best! 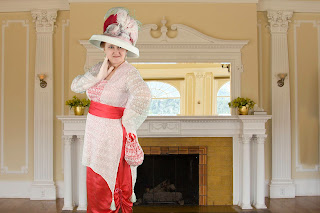 This costume is one that I made last year for the 100th anniversary of the sinking of the Titanic. The traveling Titanic exhibit was in town at the time and there was an entire weekend full of lectures and events. (Including a 10-course recreation of the last dinner!)
This is the outfit that I made to attend the exhibit and lectures.
I used Simplicity pattern #8640 (which has since been discontinued). It's their version of Rose's blue tea gown from the movie. I made the yellow version on the left, but made a few changes to the pattern. 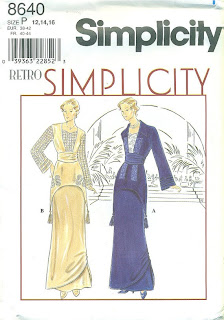 For one thing, I made the tunic a little longer because it seemed a bit short to me. And I used a LOT more lace. I love my lace, you know! ;-)
I made a little matching draw-string purse to go with it, and wore it with a pair of pink gloves that I inherited from my husband's grandmother. 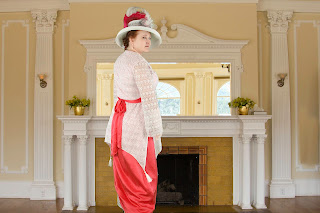 You can't see the shoes in these pics (taken by the supremely nice Don Searle at Costume Con 2013) , but I wore a pair of nude-colored dance character shoes with louis heels like these: 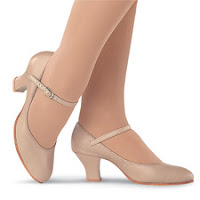 But my favorite part of the outfit was the very big hat!
If you want a really impressive 1910-1915 day outfit, bigger is definitely better when it comes to hats. 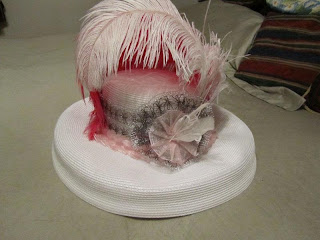 I found the hat at Dillards. I took off the generic white bow and added my own stuff. I started with a silver wired lace ribbon. Then pleated a pink ribbon to add at the base of that. I curled white, light pink and dark pink ostrich feathers and added them next. Then I created rosettes from the ribbons and used them to hide the base of the ostrich feathers. One last little feather glued on to the front of the rosettes completed my hat.

I've gotten a lot of use out of this outfit. I made it for the Titanic exhibit in 2012, wore it to Costume Con in May of 2013 and then wore it again to the Scott Joplin Ragtime Festival in Sedalia, MO in June 2013.
Posted by crafty lady at 12:06 PM