Neo-Bedouin....Did I spell that right?

So here's a costume that I kinda threw together for Costume Con. 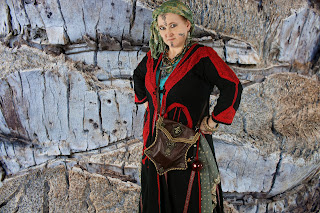 I made the coat a few years ago just because I found a pic I liked in The Worldwide History of Dress by Patricia Anawalt. It's called a yelek, a female coat first introduced into the Syrian area around the 1830s. 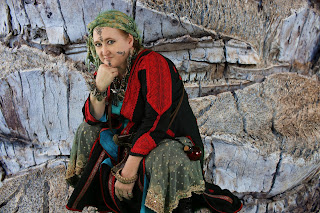 I'm wearing baggy black trousers and a turquoise top which matches the coat's lining. The slits in the side of the coat let an Indian dupatta scarf peak out like a skirt. It's too bad that pics can't capture the sparkle of the scarf with its sequins and goldwork.

I've wrapped a long scarf turban-style around my head. For accessories, I just grabbed a bunch of ethnic-style jewelry that I had and topped it off with a great leather bag that I bought at Naka-Con from Crimson Chain Leatherwork.

Since I'm a face painter, I took my black face paint and went with Moroccan-style designs painted on my face to look like harquus.

So the only thing I actually made for this costume was the coat. The rest was purchased and re-purposed. But it was really fun to wear!

(Photos are by Don Searle.)
Posted by crafty lady at 7:52 PM