So here are my other costumes from Teslacon. I went very heavy on the red and black because I already had pieces from my Madame Red costume and I re-used my neo-bedouin outfit.

So this is what I wore on Friday: 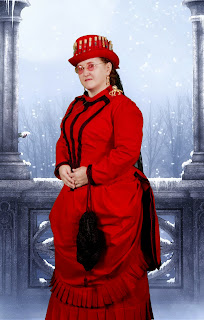 I wanted a kind of mad scientist/Victorian lady look. I took my Madame Red skirt and built on that. There's a band of plastic test tubes sewn around my hat (which I bought at Naka-Kon because it was the right shade of red!) The test tubes are filled with things that I scrounged from my craft room - pearls, stones, glass micro-beads, metal chains and variegated copper foiling. It got quite a few comments. :)

For the top, I wanted an old-fashioned, asymmetrical labcoat-style closure. You can't see it very well in the photo, but there is a triangular flap that snaps across the shoulder and down to the center front point. But I wanted it to fit with the Victorian bustle. I looked all over for a good pattern and found that I already had one - Truly Victorian's 1883 tail bodice pattern. 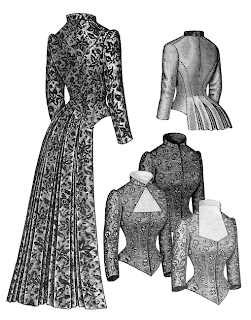 I had to re-do one of the front panels so that it had the right closure, but otherwise it was perfect!
The fit wasn't so hot because I only had a few days before the convention to get it done.

(How many other costumers are frantically sewing up to the very last second? I see you out there looking guilty!)

Because I was cutting it so close, I didn't make a mock-up.
The sleeves are much too loose as a result. I'll have to redo them. And I think I can finesse the bust area to be a little smoother, too.

There was much screaming and gnashing of teeth when I discovered that!
Okay, maybe not so much teeth-gnashing, but there was some throwing and cursing.

I didn't have time to redo the whole thing. (Last minute, remember?)
So I grabbed a bunch of decorative braid that I had left over from a previous costume and used it in a military-style effect to cover the little (giant!) boo-boo. Then I trimmed around the wrists and around the tail.

It turned out all right, I thought. It was very eye-catching among all of the browns and muted colors that are typically used for Steampunk.

And I wore my neo-bedouin outfit on Saturday. 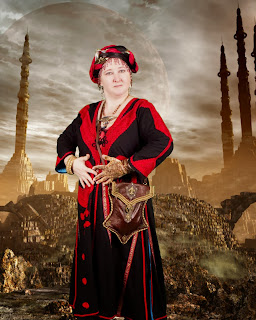 Not going to say much about this one since I've already talked about it in a previous post. I did wrap a different turban to go with the red and black theme this time. Added some beads and a Japanese hair ornament stuck into it, too.

This is me hamming it up for the camera, pretending to be regal and the queen of my alien planet.
:)
Posted by crafty lady at 6:27 PM