I thought I'd make a little post about my husband's costumes, even though I didn't make them.

Here's a close-up of my hubby:

His character was an airship gambler. That's the steampunk version of a riverboat gambler. So he sewed card suit charms on his hat. The side you can't see has a pair of cards stuck in the hatband that he informs me is called the "dead man's hand". He made the hatband himself (with the help of a friend) out of copper flashing and parts from an old grandfather clock.

Here's the full-length version. The pants and shirts that he wore were all hand made, and the vests and accessories were purchased to go with them. 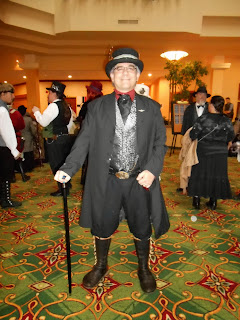 One day he wanted to have me paint his face for the photo session. The first one went up too far on his forehead and ended up being covered by his hat. The second photo was the final design that he wore. 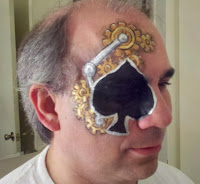 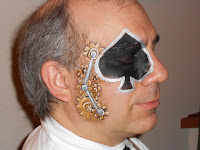