Living in the Wild, Wild West

Well, the hubby and I went to Teslacon again this year. It's the biggest steampunk convention in the Midwest. Lots of fun times to be had! The theme was the wild west, so there were many western-themed classes and events. The hubby learned how to crack a whip, which pleased him to no end.

Of course, I had to make a couple of new costumes. Duh.
I decided to do fairy costumes this year, so a steampunk fairy was the obvious choice. But I also decided to make a green absinthe fairy since that fits with the general Victorian vibe of steampunk.

The absinthe fairy was a fairly typical construction - new corset top, new green skirt, new green fascinator and new wings. The only thing really interesting is that there are fiber optic cables in the wings that light up. It only shows in dim lighting, though.
The fascinator looks a little weird in this pic. The feathers on the side are blending in a little with part of the wing in the back, making it look like I have something sticking out the side of my head. But I do look suitably drunk! 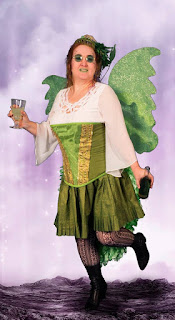 The steampunk fairy wings were a little more intricate! They are made of cellophane sandwiched between 2 layers of craft foam. Boy, did it take a long time to cut out all of those openings with an x-acto knife! 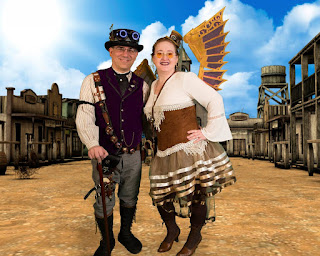 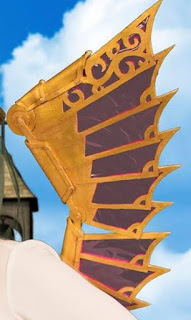 Photos by Realtime Portrait Studios
Posted by crafty lady at 11:22 AM