I think that title makes me sound like Tony the Tiger. Hmmm...

I thought I'd post some pics of what my costuming guild has been up to in the past several months. This spring we decided to have an April Promenade at a local arboretum. The weather was fabulous!
I wore my Titanic-era evening gown.

I know. An evening gown for a daytime promenade. How gauche!
But it was comfortable and I didn't have any pictures of it yet, so on it went.

This is the group we started out with: 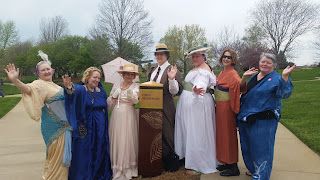 Then more people joined us later. 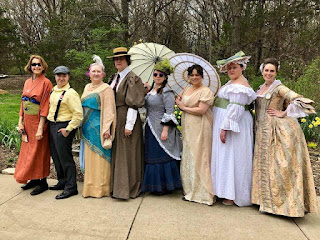 A picture of me hamming it up theatrically and a photo-shopped version one of the guild members made. 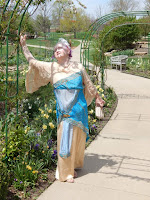 Later in the summer, the guild had a booth at our local Maker Faire. We have had a booth there for as long as it has existed in Kansas City. In fact, that's how I found out about the guild in the first place.

We like to offer some interesting hands-on things for the kids, so we had coloring sheets to design your own superhero costume and a mask-decorating station to make superhero masks. We were totally wiped out of everything by the end of the second day!

For the adults, I bring in my dress form and 3 costumes. This year it was an 1885 bustle gown, a 1775 robe a la francaise and a kimono. I have a poster that says "What Underwear is Under There?" and I periodically undress and re-dress the dress form whenever anyone asks. Fun for me & educational for them. 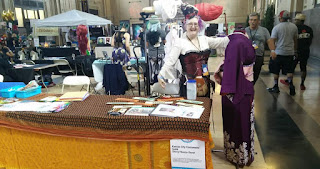 Then in July, we had a workshop to create steampunk accessories. This was in preparation for an August outing to our local Steamboat Arabia museum. We're doing a Steampunk Steamboat tour!

Things we made at the workshop: 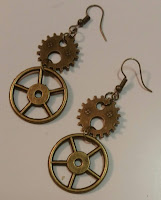 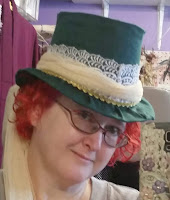 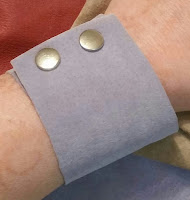 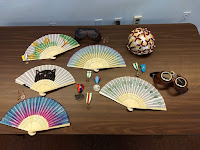