Costume-Con recap (or Holy Crap! How late is this post?!)

So I actually competed in the historical competition at Costume Con. No workmanship awards, because I am fully aware that my workmanship on this one was crap. Seriously. Major crap.

I was more interested in getting it working than how it looked inside.

First of all, I have to say that I am bad at thinking up clever presentations. Very, very bad. So I was determined to win a performance award this time. I tried to think of something that I have never seen done at a costume convention. Aha! A quick-change!

Not the kind where you flip your cloak inside out or something. Those have been done. I mean the kind that magicians do where you can't figure out how they changed outfits completely in 2 seconds.

I wasn't sure if I could do it, but I started researching. I decided on the Edwardian era, because I figured that I could stuff a lot of fabric inside one of those pigeon-front dresses. ;-) 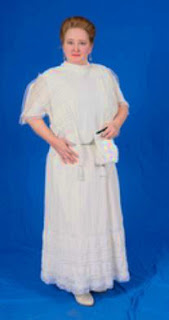 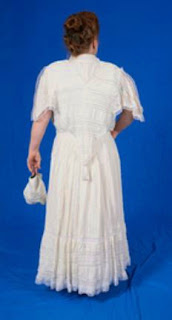 So here is what I came on stage in: 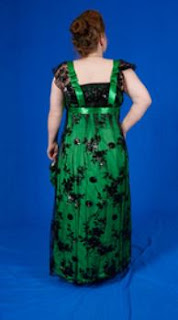 Then I stepped behind a screen for 5 seconds and emerged wearing this:


I got so many gasps!!!
Later, when the judges were deliberating, the contestants went back out on stage two by two for the audience to take photos. This time I changed right in front of them instead of behind the screen and I still got gasps!

Then I spent the next hour switching back and forth so that people could see how it was done because it was apparently too fast for people to figure it out even when I did it in front of them.
And I won best presentation for a journeyman! Yay!

(All photos are by Real Time Portrait Studio. Thanks Scott!)
Posted by crafty lady at 7:57 AM