I decided that I wanted to make one really elaborate costume for the convention. I spent days scanning anime on Netflix and requesting manga books and anime DVDs from the library. As I was watching an episode of Black Butler, I gasped and stopped the DVD.

I had found my costume.

Black Butler is a series set in Victorian England in the 1880s (or thereabouts. Anime is not too terribly big on historical accuracy.)
This particular episode showed the main character’s aunt, widely known as “Madame Red”.
YES! I could do a Victorian/steampunk costume and it would still be anime!
And since I’m planning on going to Teslacon later this year, I could actually wear the pieces again.

I already had the Victorian underwear - a corset, petticoat and chemise - so I could just concentrate on the outer layers. 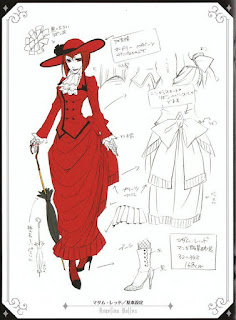 (I’ve seen this image all over the internet, but could someone PLEASE tell me who it belongs to so that I can attribute it appropriately and ask permission to use it? I hate copyright infringement.)

I had to make it double breasted and redraft the collar and hem, but it had the same basic shape.  I made it just a tad too short, though. Seems to be a habit of mine. Oh well.

I didn’t really have a skirt pattern. I just went through my books on costume history and adapted some of the pattern shapes to create the skirt. The fun part was the pleating!

Yes, I know that I am weird. I actually think pleating is fun.

Do you know what the secret is for long-lasting pleats?
Natural materials & vinegar.
Synthetic materials don’t take pleats very well. You really have to use natural fabrics to get that nice sharp crease. And if you spritz them with a vinegar/water mixture while ironing, the pleats will stay through just about any wearing.

I had the right boots already. I just made some spats for them based on a Youtube tutorial I saw years ago.  Found a red hat on line & trimmed it up. Made a white cotton and lace ascot.

I found a good red wig on ebay.  And then I found that cutting a wig is hard. The bangs especially And it’s not something that I really want to do again. But it came out okay this time.

And finally…the pics from the professional photographer! 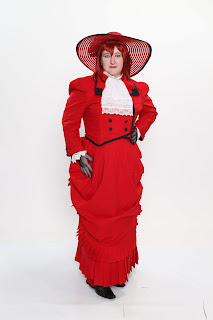 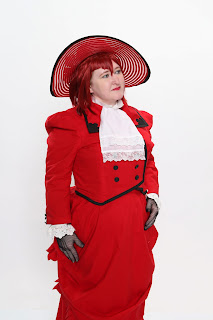