What the heck am I doing at an anime convention??? 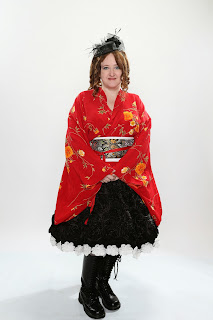 I’ve seen a few animes and read some manga, but I am far from a big fan. So why would I go to an anime convention?

The costumes, of course!

A friend of mine in the local costuming guild got put in charge of the cosplay part of a local convention called Naka-kon. She asked me to help judge hall costumes. I thought “Sure. Why not?”

Then I realized I don’t own any anime costumes.

What am I supposed to do? I’m NOT going to be judging costumes in regular clothes!
So I put my historical costuming on hold & frantically started researching the kinds of costumes that I could expect to see.  I figured that I had enough time to make one elaborate costume and two simpler costumes to see me through the 3 days of the convention.

I looked at the Naka-kon web site and found that it was also a con that promoted and taught Japanese culture.

I have always wanted to deck myself out in lolita-style clothes but never had an excuse. Well, I had an excuse now. Woohoo!

So I researched lolita style and found out that it’s actually segmented into a number of sub-styles. Check out this page for some of the different ones - http://lolita-handbook.livejournal.com/3035.html
I liked the “sweet lolita” style, but there’s way too much trim for me to sew two dresses in this style. I wouldn’t have time. So I decided on one sweet lolita.

What else could I do for a simpler, quicker costume?
Well, I had a kimono that I made a few years ago. So I decided to cut it down into a top and do a wa lolita outfit. (Wa lolita is one that has Japanese traditional elements like kimono tops.) I also had a couple of accessories and some Doc Marten boots that I could combine with it. So I ended up with a wa/punk lolita combo.

There was a professional photographer (Ron Berg) there the first day, so I actually got pro photos of this one!
Yeah! 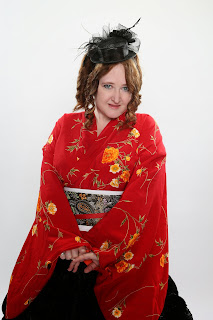 My favorite part is the fabric of the skirt. It's kind of "shabby chic" ribbon roses. But when I cut it out, I found that I made it too short! So I rushed to the store & found a pretty white trim of very similar style flowers. Sometimes it's the mistakes that end up being the best things, creatively speaking. 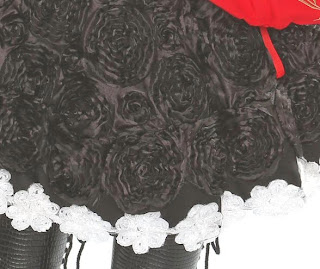 By the way, you can see in these photos how long my hair really is. Compare that to the very short curls in the post about the hedgehog style!
Posted by crafty lady at 12:01 PM