So I'm finally able to get back to where I started with this blog - my competition costume for Costume-Con 31! I started to blog about the whole process, but then thought that I shouldn't reveal everything before the convention.

Now the convention is over, so here it is: 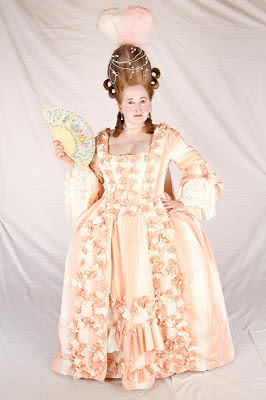 It's all hand-sewn using period techniques. I won best workmanship for the Journeyman category and an honorable mention for my documentation. Nothing for presentation, though. Phooey! (pout)
I guess I know what I have to work on now, huh? Although I did get a couple of really big laughs. I came out and started dancing to harpsichord music. After about 30 seconds, disco lights started flashing and Shakira's "Hips Don't Lie" started playing & I boogied down. :-)

That's where the title of this post came from - it was the name of my entry in the competition.
I thought it was appropriate given the hoops. There were 2 other women in the competition with even bigger panniers, though.  Mme de Pompadour's gown was more elegant and Marie Antoinette's was more over-the-top, but I think my dress was prettier. (I even did the "pretty, pretty princess" dance the first time I put it on.) 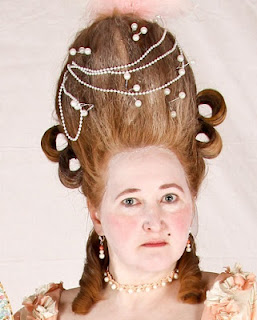 It took about 45 minutes to get my hair up in that style. Another lady in the competition (the Marie Antoinette) had a similar style. Hers was a wig, but it was even taller than mine! I was limited by the length of my hair, but I honestly don't think that I could have gotten it any higher by myself. I could have had longer hair, but my arms couldn't have reached any further. (grin)

Over the next several blog posts I'm going to detail the whole process of the costume from start to finish, so I'll talk more about how I did the hair later.

(BTW, the convention had a great photographer so I got a lot of good professional shots of most of the costumes that I took. Check him out at www.donsearlephoto.com.)